We use our own and third-party cookies to make our website work safely and personalize its content. Likewise, we use cookies to measure and obtain data on your navigation and to adjust advertising to your tastes and preferences. Press the "Accept all" button to confirm that you have read and accepted the information presented. To manage or disable these cookies, click on "Configuration". For more information see our cookies policy.
Modify cookies
Technical and functional Always active
This website uses its own Cookies to collect information in order to improve our services. If you continue browsing, you accept their installation. The user has the possibility of configuring his browser, being able, if he so wishes, to prevent them from being installed on his hard drive, although he must bear in mind that such action may cause difficulties in navigating the website.
Analytics and personalization
They allow the monitoring and analysis of the behavior of the users of this website. The information collected through this type of cookies is used to measure the activity of the web for the elaboration of user navigation profiles in order to introduce improvements based on the analysis of the usage data made by the users of the service. They allow us to save the user's preference information to improve the quality of our services and to offer a better experience through recommended products.
Marketing and advertising
These cookies are used to store information about the preferences and personal choices of the user through the continuous observation of their browsing habits. Thanks to them, we can know the browsing habits on the website and display advertising related to the user's browsing profile.
Gift Cards
The perfect gift to excite, surprise and celebrate special moments with your loved ones.
Gift Cards

Girona has an international reputation as a world-class cycling destination & the city has long been home to riders from the professional cycling peloton. Girona enjoys good weather all year around, beautifully surfaced roads & a wide variety of terrain.

Lance Armstrong was not the first professional to settle in the area and predecessors include Danish cyclist Johnny Weltz who, after training as a professional here in the 1980s, became Director of Team Cannondale-Garmin and set up a permanent base for the team in Girona.

Positioned between the Pyrenees and the Costa Brava cyclists can enjoy a huge variety of routes from a base in Girona. Here are our 3 road cycling favourites:

This is a 68 km loop which is a huge favourite with local riders, taking in the two classic Girona climbs of Els Àngels & Santa Pelaia. Stop for coffee halfway in the medieval village of Monells.

A 70 km loop taking in the rolling lanes north of Girona. Stop for coffee at Banyoles Lake before taking on one of the most challenging climbs in the region, Rocacorba.

A must-see 90 km loop for all cyclists visiting Girona. Ride south out of the city to the mediterranean. From Llagostera climb San Grau before dropping down to the stunning coast road. Enjoy lunch in Tossa de Mar before returning home.

If you don’t want to travel with your bike then there are lots of rental bike options in Girona.

There is also a fully equipped workshop at Eat Sleep Cycle for anyone travelling with their own bike in need of mechanical support. The shop also stocks a range of cycling clothing & accessories, including the Girona inspired range by CHPT3.

We welcome cyclists at Hotel Carlemany. In July 2015, the Catalan Tourism Agency awarded the Sports Tourism Destination certificate to Girona. The Hotel Carlemany has also been certified as a sporting establishment for running and cycling.

Secure Storage for your Bike

Hotel Carlemany has a secure area to store bikes covered by video surveillance. There is space to store, repair and clean up to 40 bikes.

Start your day with our breakfast buffet, made up of fresh, locally sourced produce to prepare you for a day out on the bike. Our restaurant offers an extensive menu with dishes at that are adapted to athletes’ diets. 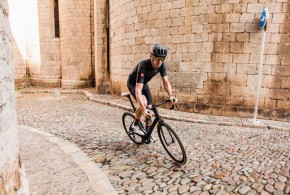 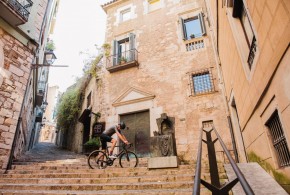 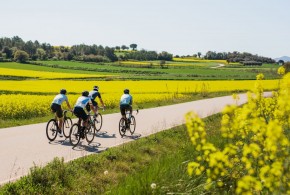 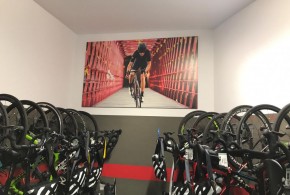